The University of Port Harcourt (Uniport) has introduced an online voting poll ahead of the 2018 Student Union Government (SUG) Election.

The 2018 Election Committee of students’ Union of Port Harcourt humbly wishes to notify the entire students and university community that the election time table has been approved by the Eleco as follows:

RULES AND REGULATION GOVERNING THE CONDUCT OF 2018 UNIPORT SUG ELECTION.

I. No person shall qualify for election if such a person:
a. Is on disciplinary suspension or facing any panel where such suspension
is not consequent upon the legitimate acts of such person in pursuance
of the lawful duties of the objectives of the union.

b. Is on a cumulative grade point average (CGPA) below 3.50, did not pass
his last MBBS/ BDS professional examination and has repeated a
session on academic grounds.

c. Is on academic probation.

d. Has been found guilty of any form of examination malpractice by a duly
constituted panel.

f. Is associated with any cult related activities within or outside the
school.

h. No person shall qualify for election as an officer of the union during the
session in which he/she matriculates.

i. Any aspirant whose posters, fliers and others are found defacing the
university building will be disqualified.

j. Any aspirant whose campaign team engages in reckless driving, and
other unruly behavior around the campus will be disqualified.

k. Any aspirant who in the past has a documented record of fighting,
stealing and drug dealings will be disqualified (except the fighting was
in the legitimate discharge of the union’s function).

II. NOTE:
a. Issuance / submission of nomination form will be done through the
Eleco Coordinator, secretary and chairman.

b. Election petition shall be filled through the chairman of the AD HOC
committee on petition not later than seven (7) days after the election.

c. All petitions in favour or against any aspirant should be forwarded to
the AD HOC committee on petitions who will forward same to the Eleco
chairman for final consideration and ratification. Any petition that did
not pass through the appropriate channel shall be considered irrelevant
and will not form any basis for qualification/disqualification of aspirant

e. Any aspirant who wishes to aspire for the position of senate
president/chief judge may/may not have been a senator/judge prior to
this time.

f. All aspirants are expected to partake in a compulsory community
service on a date and time to be communicated by the electoral
committee.

g. All aspirants are expected to submit their flex banner (1) to the eleco
who will solely be responsible for the posting of such at a central
location provided by the school to avoid littering of posters on campus.

h. Any candidate who contravenes any section of the rule shall be
disqualified. 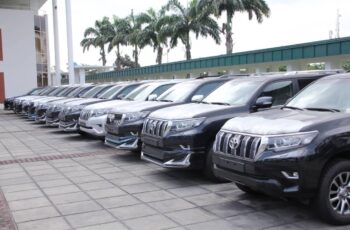