Home
Wazobia News
ONE DOWN, ONE MORE TO GO – Ojukaye Flag Amachree
SHARE to HELP OTHERS

The short and indirect phrase (ONE DOWN, ONE MORE TO GO) posted by the state chairman of the All Progressives Congress (APC) in Rivers state, Hon Ojukaye Flag Amachree few hours after the declaration of the Ekiti governorship election result, by the Independent National Electoral Commission (INEC) on his Facebook timeline seemed like a resounding signal to the governor of Rivers state, Ezenwo Nyesome Wike ahead of the 2019 elections.

Wike, an ally to the just defeated governor of Ekiti state Ayodele Fayose, who in collaboration has displayed a high level of tyrannical sovereign, with so much impunity since 2014 met his doom on the 14th day of july, 2018 as the people of Ekiti state spoke through their PVCs.

This has imbued fear and anxiety into the political atmosphere of Rivers state, leaving Gov. Wike in an immense pressure and in search for protection as usual found himself in the Anglican Cathedral Diocese of Niger Delta North, Garrison-PH. Lamenting the misfortunes that is about to befall him in few months.

The duo whom Nigerians have tolerated their excesses in rascality, thuggery, disrespectful, tyrannic in administration and abuse of immunity, are now chasing air as the citizen strips them off their immunity with the power of their vote.

Meanwhile Hon Ojukaye who had earlier, confidently declared operation “No complain in election tribunal” by his party in the 2019 elections, reminded wlke of the countdown to his exit from the Rivers brick house with the phrase ” ONE DOWN, ONE MORE TO GO” 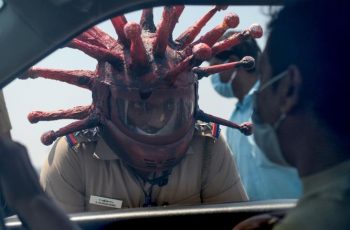 Here is a photo of a policeman in India taking …