Minister of Transportation, Rt Hon. Chibuike Amaechi has cautioned his supporters and Rivers people to steer clear of violence as that is not the best way to resolve any issue. 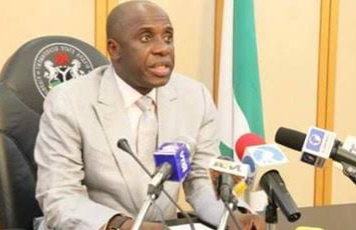 Amaechi was reacting to two viral videos of his alleged supporters in Rivers state, one group inciting violence and the other dissociating him from the comments of the first group stating that he is a man of peace.

He addressed the issue during a TV interview Tuesday, stating that the rule of law must be respected and upheld at all times.

He said, “First, if you say you’re my supporter, you’ll know that I don’t just respect the law, I fear the law. Breaking the law can put you in jail. Because of the kind of words used in that video, I may have to address it.

So if you think that what the state judiciary is doing is wrong, then you go to the court of appeal, you go to the supreme court and ensure you exhaust the due process. No matter your frustration, you don’t have the right to take the law into your hands.

Asked about the crises in his party at both national and state level, Amaechi said, “What is happening in APC, I don’t know, what is happening in Rivers State, I don’t know. What I’ve done is to keep away from politics, even if I’m bothered, it’ll be internally; there’s nobody there (in the party) who is a child, we’re all adults. I don’t want to get involved in the politics.

“Nigerians know me for being blunt and honest. Some see it as arrogance, some see it as being brash, whatever it is. What do I need to say that I have not said before? It’s internal dynamics of politics, it’s internal struggle.

So, I have said it several times, when we fought in 2015, I said this country cannot continue the way it is going. I’m not helpless, but I’m doing what they call ‘sidon look’.

I’m responding to those videos is because they all said they are my supporters, those who made the comment and those who countered them. My message to everyone is to tell everybody who is supporting me to please remain calm and get out of violence. Never be part of violence because I will not defend anybody when you get violent.

My kids and my brothers know that I’m not a man who will come out to subvert the law. So I will not come and help you, if you’re my brother or my son and you take the law into your hands.

Rivers State Governor, Nyesom Ezenwo Wike has explained that he …

The Rivers State Government under the leadership of Rt. Hon …