Sincerely I have not seen a deceptive politician like Magnus Abe before him, a man who comes out open to the people like an angel and takes devilish actions in his inside. Now I know why the Honourable Minister of Transportation, Rt. Hon. Chibuike Rotimi Amaechi was never in support of his desperate ambition to become a governor of Rivers state.

First, one of his aides Dae Steven Deegbara was the coordinator of the kwakwasiya group in Rivers state, supporting the presidential ambition of Sen. Musa Rabiu Kwakwanso as against that of President Muhammadu Buhari.

Secondly, it was another of his aide, Kennedy Friday who totally showed his commitment to the presidential ambition of Sen. Abubakar Bukola Saraki by using the photo of Abe and Saraki as his facebook cover page and quickly removed it when it was criticized.

Right now, his supporters are spreading his view of the CJN’s suspension by the president in every social media space. This was what the Rivers State chapter of the All Progressives Congress has been complaining all the while of Abe’s coalition with Gov. Wike and the PDP in the State, pointing fingers to his spoiler role in the party to favour Wike and several gifts he has received from the Governor.

While the deceiver has been denying all these in media houses and other public means because of his bid to successfully destroy the party for Nyesome Wike,and after making him a member of the President Buhari campaign committee, his supporters came tired of the wait as they publicly criticized the president for every action as though they are members of the opposition party.

The APC needs no much evidence to know that Magnus Abe is no longer a member of the party and as such must expel him from the party, hearty members of the party has called on the party severally to take this action and I think that should be the best for them.

They party should never think of leaving Abe with a responsbility to deliver any of her candidates even in his unit or risk their victory in the 2019 elections. This is my candid advice for the APC.

The way suicides have made it first choice, Sniper insecticide … 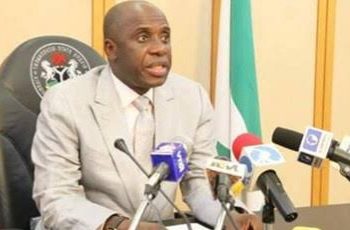 Minister of Transportation, Rt Hon. Chibuike Amaechi has cautioned his …