Federal Government to Deploy 50,000 N-Power Volunteers By September: In a statement by the Senior Special Assistant to the President on Job Creation and Youth Employment, Mr Afolabi Imoukhuede revealed that about 50,000 N-Power non-graduate volunteers would be deployed in late September and trained in October.

This was made known during a press release in Abuja on Tuesday. Mr. Afolabi said the deployment was delayed to enable the job creation team to provide all needed training materials for the volunteers.  The volunteer would be deployed to start a three-month vocational training in seven disciplines followed by a nine-month apprenticeship in related industries before venturing into self-employment.

“For North East, we have Yola, for North West we have in Kaduna and for North Central, we have a warehouse in Abuja. “These are zonal warehouses that have received tools for all the vocational trades from automobile to carpentry and all the seven disciplines.

“In addition to that, the training consumables that the centres would also use to bring the volunteers to the level of industry competence were also procured and distributed in all the six zonal warehouse.

“So, there will be no case of the training being given out in Yobe different from the one in Kaduna or in Umuahia and also no question of some centres having consumables and others claiming they were not supplied.”

Mr Afolabi said a centre assessment committee, with the Labour Minister as Chair and him as alternate chair, was set up early in the year to visit the zones.

Now the next stage after the Assessment Test Phase is the N-Power Pre-selection stage. This is the stage where beneficiaries will be pre-selected for physical verification he said. 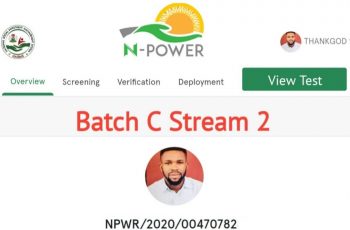 Are you among the NPower Applicants waiting for the second … 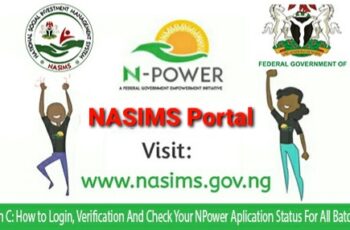 Are you an N-POWER batch C applicant? Are you looking …