Home
Wazobia News
Eze Hails Buni, Lalong, Sylva, Saraki & Others for Showing Solidarity with Amaechi at His Brother’s Burial
SHARE to HELP OTHERS

Dede’s Burial: Eze commends Amaechi for honouring brother’s memory… Hails Buni, Lalong, Sylva, Saraki, other dignitaries for showing solidarity with Amaechi at the funeral… Berates those in APC & PDP mentored and assisted by Dede who refused to honour him during his burial solely to sustain bickering and politics of bitterness. 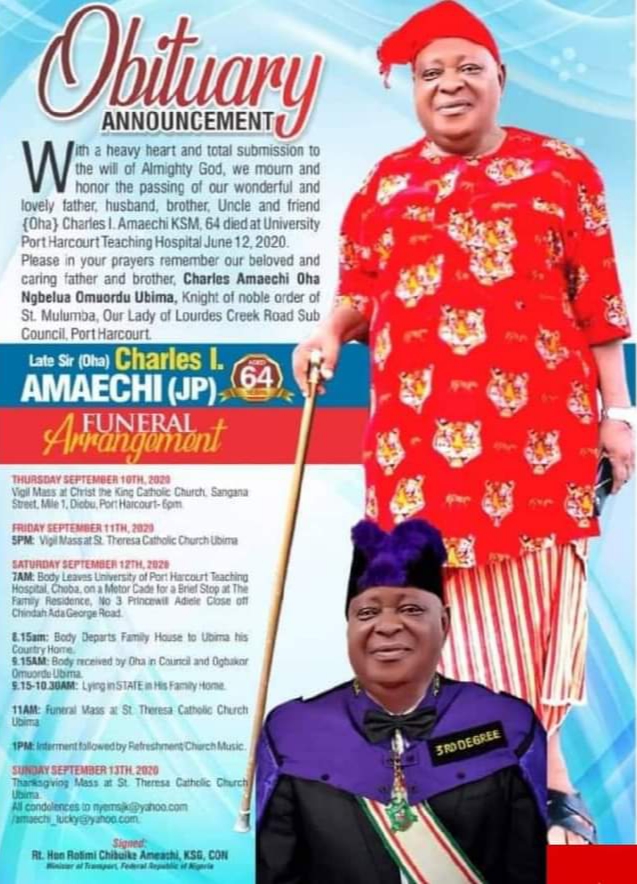 “In keeping faith with an earlier pledge not to issue any press statement until after the burial of Sir (Oha) Charles I. Amaechi (JP), elder brother of the Transportation Minister and South-South leader of the All Progressives Congress (APC), Rt. Hon. Chibuike Rotimi Amaechi, as a mark of respect and honour to the dead and following the successful interment and Thanksgiving Service, Saturday and Sunday respectively, in Ubima town, Rivers State, I wish to express a profound gratitude to God for a hitch-free funeral conducted by the Catholic Church”.

The afore excerpt are the words of erstwhile National Publicity Secretary of the defunct New People’s Democratic Party (nPDP) and chieftain of of the APC, Chief Eze Chukwuemeka Eze, in a recent statement made available to media houses where he commended the Minister and his wife, Dame Judith Amaechi for honouring ‘Dede’ (as he was fondly called), even in death.

He said the funeral which threw the community agog with the presence of people from all walks of life points to the fact that Ohna Dede Amaechi led a good life worthy of emulation and impacted meaningfully on not just his family and community alone, but all those who came in contact with him and the society in general.

Speaking at the church service, the Chief Mourner, Rt. Hon. Chibuike Amaechi said the death of the deceased has created a big vacuum and has placed further responsibility on him.

“He has left us with a huge responsibility that I never imagined would be so soon to confront and a challenge that I lack the capacity to discharge. Chikamkpa, Lemchi, Obinna, Judith and I will find it difficult to come to terms with his death. We can only pray that Dede rests in the bosom of the Lord”. 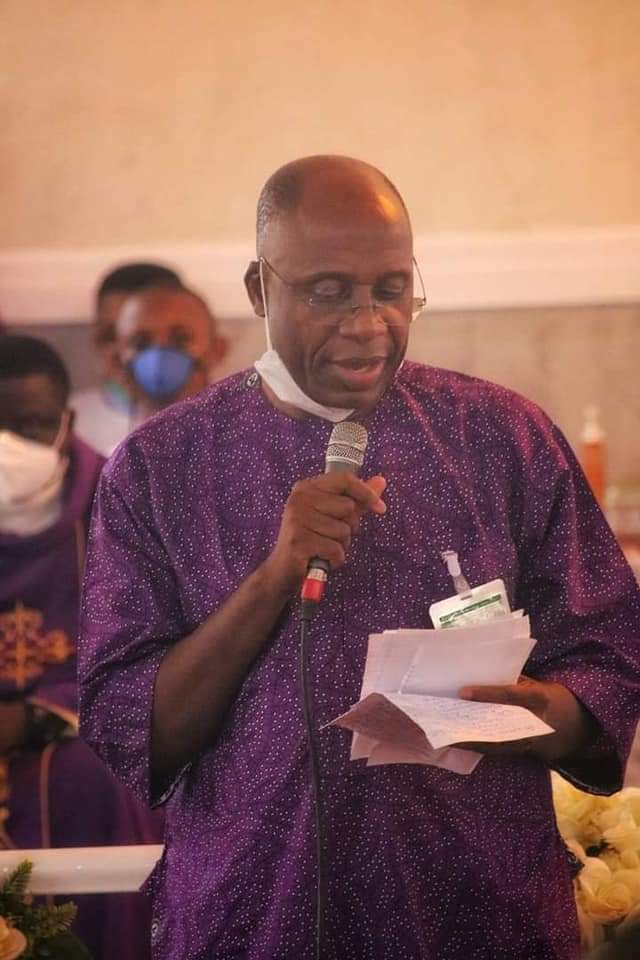 In his words, “the late, Sir, Charles Amaechi has done a good work because it is not easy to be a Knight, ours is to emulate him and his contributions to the church of Christ. I am here to represent the Chairman Nigeria Governors Forum, the person of Gov. Kayode Fayemi and also the Northern Governors Forum, which I am the Chairman, to extend our condolences to Chibuike Rotimi Amaechi for this great loss”.

Lalong, however, donated a 32 seater bus on behalf of the Plateau state government to the church as a mark of remembrance for the good deeds of the deceased. 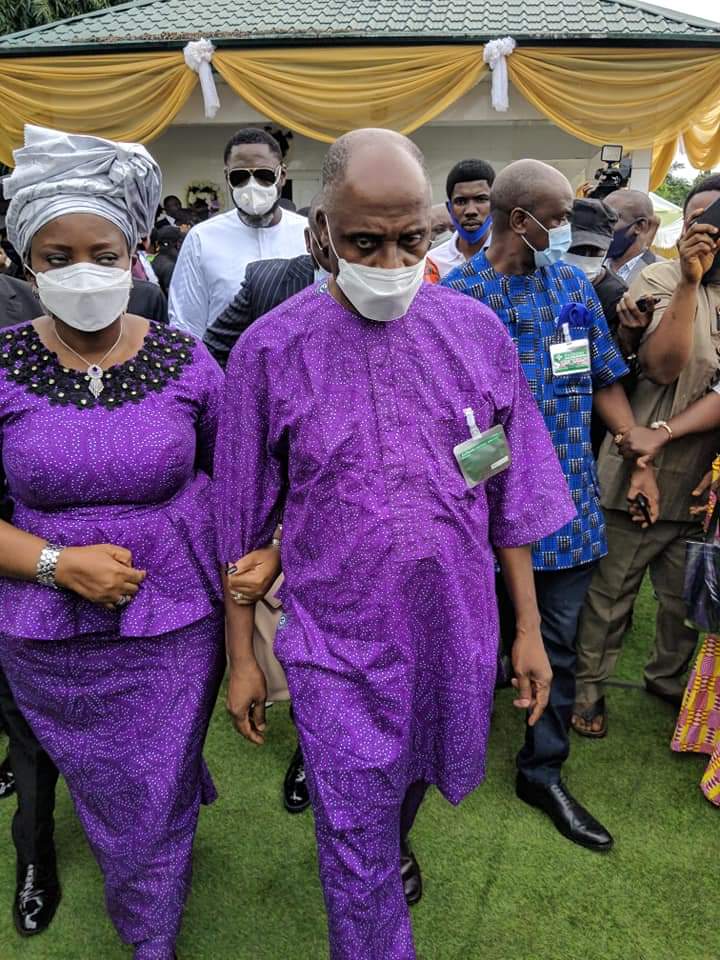 In her condolence message, Minister of State,Transportation, Sen. Gbemisola Saraki, said the deceased lived a worthy life bequeathed with legacies for which he would be fondly remembered.

Also speaking, Chairman of the All Progressive Congress ( APC) in Rivers State, Isaac Ogbobula, Esq described the deceased as a perfect gentleman and a devout Christian of the Roman Catholic faith and a Knight of St. Mulumba. 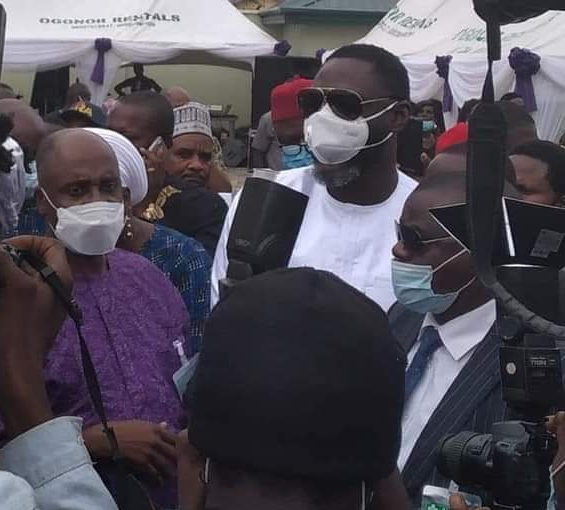 while H. E. Ambassador Ngofa sent a Representative as he was still at Netherlands on official duties

Chf Akin Ricketts
Chairman of the NPA Board,

State And LGA Leadership Of NYLC

Eze specifically commended and congratulated Hon. Asita Honourable Asita, Chairman NIMASA Board and his Team for organising and setting up the venues for the events.

Eze berated some of those mentored and assisted by Dede under the political family of Rt. Hon. Chibuike Rotimi Amaechi for shunning his funeral, his good deeds to them notwithstanding.

He said the event presented a fantastic opportunity for the reconciliation of all conflicting interests within the APC and the larger political family of Amaechi but expressed disappointment that the window was never utilised.

Eze expressed happiness that with the calibre of APC members that attended the event coupled with the defection of some PDP Federal Lawmakers to the APC, it clearly shows that the Rivers APC under the leadership of Rt. Hon. Dr. Chibuike Rotimi Amaechi is not only intact, united but ready to take over the Brick House come 2023

Sir Charles Amaechi passed on at 64 at the University of Port Harcourt Teaching Hospital, Port Harcourt, Rivers State. I pray that God grant his soul eternal rest and those of us he left behind the fortitude to bear his sudden departure.

Omoku Stands Still as the All Progressive Congress (APC) in …

The National YOUTHS SUMMIT which was launched on Saturday 10th February …