Home
Wazobia News
Emma Chindah Debunks The Accusation Laid on Him By Gov. Wike on Disrupting the June 16′ Rivers LGA Election
SHARE to HELP OTHERS

His Excellency, Gov. Ezebunwo Nyesom Wike, we carefully listened to your media broadcast aired on June 14′ 2018, where you sited the above accusation. We’re indeed compelled to respond to the allegations, assertions and false accusations your malicious broadcast conveyed.

His Excellency, It’s indeed disheartening and gives us (Rivers people) great concern why a man of your honour will for political reasons stoop so low to peddle falsehood which is tantamount to character assassination of the illustrious sons of our dear State who has been pivotal and has equally given their all to the development of Rivers State.

Hon. Emma Chindah as a responsible Rivers son widely known for his high moral standards holds prodigious honour for the corpus of law, as such won’t conceive the thought of employing hoodlums to disrupt a generally known illegal election scheduled for June 16′ 2018 in his political precinct (Emolga). It can only take one suffering from delusion to make such assertion.

Prior to this purported and ridiculous broadcast, APC as a political party has made their position of boycotting the LGA election known based on it’s illegality. Hence, has no interest in the outcome of the LGA election.

Taking into cognizance that Mr. Chindah as a key player in the political affairs in Emolga poses colossal threat to Governor Wike and his cohorts. As a people, we won’t fold our hands and watch the governor strategically kill our brother, son and leader. Enough is enough!

On this note, we wish to draw the attention of all the security and law enforcement agencies to intervene as we are no longer comfortable with the incessant frivolous accusations of the governor against our leader, Hon. Emma Chindah. 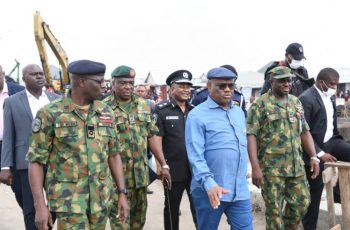 Following the violation of the market closure order, the Rivers …

Information reaching us at Wazobia Infos has it that the …